Posted at 18:27h in Blog by Panache Desai

Another Look at Living Fearlessly

Director Steven Spielberg knew what he was doing when he released his epic summer thriller, “Jaws” in June 1975. The musical score alone makes even the most courageous heart skip a beat. Fewer things in life create a stronger primal surge of adrenalin than sharks, and a great white (the mac daddy of all sea creatures) will forever haunt our minds, even when we step into a backyard swimming pool.

But there is at least one person who is not at all afraid of a looming great white shark. Ocean Ramsey, a Hawaii based conservationist and experienced free-diver, swims with the great whites to show the public that the endangered predators aren't as frightening as blockbuster movies have made them out to be.  She has been dubbed “The Shark Whisperer” and for good reason.

Earlier this year, after observing numerous great whites for two days from a submerged cage, Ramsey ventured outside the bars, kicking slowly towards a 16 ft. female before grabbing its dorsal fin and hitching a ride through the beautiful deep blue water. Ramsey, who had begun diving with sharks at age 14, described the incredible feelings at that moment of contact as a mixture of “incredible joy and breathtaking emotions”.

“There is an instinctive fear, knowing what the animals are capable of, but it's hard to describe what it's like to be in the presence of such a magnificent animal,” she said.  Instinctive fear or no, Ramsey faced it head on, experiencing an unforgettable encounter and the highlight of her life long diving career, that would change her life forever.

Obviously swimming with deadly predators is extremely dangerous, but if a lithe, blond scuba diver has the courage to face a great white shark, what show stopping, life-style changes would you make if fear weren’t holding you back? Who might you be?

When we embrace our life and live fearlessly, our dreams no longer remain just dreams. By taking the first step of shifting our vibrational energy from frightful to fearless, we fire a blazing flare into the universe that says we’re ready to take the risk, honor our divinity and wring every drop of wonderful out of the life we’ve been given. 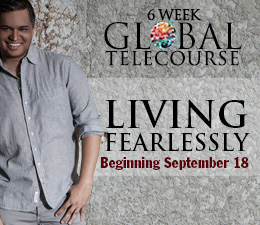 Beginning September 18, Panache teaches LIVING FEARLESSLY, a six week Global Telecourse that will vibrationally support your expansion from fearful into fearlessness as he supports you in becoming your own “Whisperer” as you shed the self-doubt and apprehension that shield you from your most brilliant self until all that’s left is your perfection, your limitless possibilities, and your brilliant, sparkling light.

Opportunities then come looking for you – sometimes disguised as your greatest terrors – that empower you to confront anxieties, grab hold of the great white dorsal fin, and glide through the magnificent ocean of life.